For brands in today's world, being visible in the SERPs is mandatory. As a result, every single day a constant flow of newbies enter the industry searching for guidance. Webmaster guidelines constantly change, are vague, unclear and difficult to follow. So who do newcomers and business owners look to for direction? Enter the Credulous SEO... creator of the Set-Up-To-Fail Syndrome.

It’s time that I had a very important discussion with you.

There’s a topic that’s been on my chest for a long time and it’s time to confess.

A widespread epidemic has been plaguing our industry that very few people seem to notice.

No, I’m not putting on my tinfoil hat. What I’m referring to is questioning what we’ve been taught. What you believe is true. And why it’s crucial you do.

What exactly is the point of this series anyway? ?

This particular video — made less than 30 days ago, mind you — is directed towards naive webmasters. The poor people who are looking for guidance on what they should be putting all resources and energy into. The reality is putting priority on ONLY these 3 tips are really just a huge disservice. And will ultimately put you way behind your competitors. Ask anyone who actually ranks. 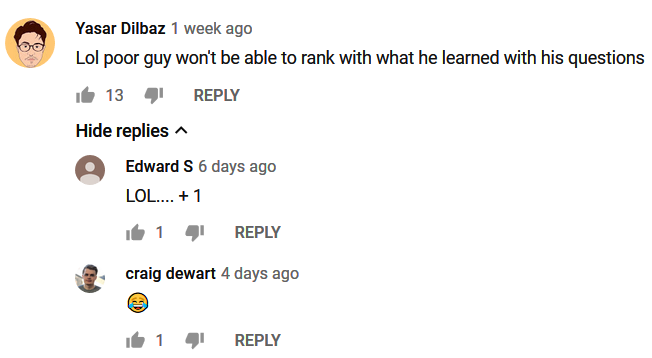 Methodical is the best way to describe SEO in today’s world.

Software, platforms, plugins, courses — designed with the intention to improve performance, create structure, and the ability to scale — have slapped innovation into a downward spiral. A job that once thrived on creativity and experimentation has turned into a clunky, robotic process.

Our social media channels and news outlets are constantly flooded with ‘how-tos’, ‘top 10 tips’, and ‘best practices’. Recycled and repackaged mediocre material from the same circles of experts. A tragic never-ending cycle.

Structure, standards, and expectations have been established and cemented by the thought leaders we admire.

Gone are the days of individuality and self-thought.

What has this led to? You guessed it. A severe lack of accountability and overwhelmingly piss-poor ranking results. ?

And the most unfortunate part of this whole ordeal? The stigma that surrounds confronting these tactics.

The vast majority of our industry approach SEO with a clueless sense of direction.

In 2019, we’re constantly bombarded with buzzwords such as “Mobile-first, Structured Data, Schema Markup, UX, User Intent”, and understand these are the industry standard practices.

But what happens when your top 10 competitors, who, in many cases are bigger brands, are all implementing these practices too?

You don’t need to search hard to find victims. They are literally everywhere.

Do you think this a coincidence? Or is this a sign of a deeper underlying problem?

Well, I’ll let you in on a dark secret.

There’s a glass ceiling when it comes to on-page optimization that is being vastly overlooked. So you should probably pay attention.

Poor, uninspired, cringeworthy SEO (warning: may cause nausea!) — whatever you’d like to call it. It’s just a simple click away.

So why is this such a commonplace in our industry? Is it due to poor analysis? Possibly. Is it due to lack of care? Unlikely. Instead, I think it’s something much worse. A predicament only recognized by those who are willing to break the mold.

The fact of the matter is, we’re being misdirected to mediocrity. On a massive scale. By the very people we look up to for guidance.

The fact of the matter is, Google doesn’t reveal significant data which exposes the intricate workings of their algorithms.

Instead, many influencers take this opportunity as an invitation to start making things up based on non-data-backed assumptions.

Considering it can be incredibly hard to recognize, as we’re all desperately searching for answers, the misinformation spreads like a super-bug. The power they have to misguide the masses is frightening.

Our SEO influencers — just like celebrities/athletes you and I follow — establish trends and acceptable rules to their loyal, inexperienced audiences. With great power comes great responsibility. And so too does the pressure to direct peers towards practices which are “up to code” and on the straight and narrow path. Even with good intentions at heart, thought leaders can oftentimes be detrimental to your success.

Rather than allocating resources towards innovation, careers are spent becoming masters at complying with Google guidelines. The process becomes scary when you consider the dune effect.

The real question is, are the people we look up to even ranking for anything significant? Are they any further qualified than you or I?

How can I say this so confidently? Others, including myself, have been testing, experimenting and ranking for some of the most cutthroat industries for the last decade. The truth is, websites ranking for competitive terms without breaking Google guidelines DO NOT exist, yet you’ll never hear this from thought leaders, go figure!

Let me repeat that in plain English – LINKS are the most important ranking factor, STOOPID! Yet why do we never hear this? ?

The team at Google is well aware of what gets the algorithm gears turning, but they aren’t going to tell you. In fact, it’s in their best interest to keep it confidential. Why would they want you to be satisfied with your organic traffic when you can pay them instead?

SEO contests never reflect real life-performance, they generate a ton of spam that negatively affects the whole ecosystem, they're a big waste of time & effort. The smart approach to SEO contests is to ignore them.

Sounds a lot like Google is discouraging innovation and trying to dismiss the practice of reverse-engineering. To me, this opens up a major can of worms. Is this to prevent flaws in the algorithm from being discovered by the masses?

Pretty useless for who though?

A lot of the participants have a better understanding of the algorithm than a lot of us “regular” SEOs will ever have.

They learn from doing, most of us “learn” from reading. Surely the doing should be encouraged? ? #devilsadvocate

^^Summed up pretty accurately. And he’s totally right in my mind. This is #winning logic – proficient SEO requires research, critical thinking, testing, experimentation that the masses fail to realize, and this is what truly puts you ahead of everyone else. Period.

A Lack of Accountability

Here’s another topic that always leaves me astonished.

I call it “Google Blamenitis”.

One of the most frequent criticisms I see – “I followed the webmaster guidelines to a T, yet I’m still nowhere near the first page, what gives? Google guidelines say to do this, and I followed Neil Patel’s 10 top ranking signals in 2019.” ?

Instead of assumptions, it’s extremely important to take the opportunity to question what you are being told.

Years ago, I took this concept to heart. I decided to run my own testing just to see what would happen. I went back to the early days in my career and found a tactic that Google said would not work.

Low and behold, my present results:

This was made with thousands of auto-generated pages. A strong parasite and clever content generation. I am not endorsing taking blackhat risks on sites that you care about. The purpose of this is to prove a point:

Not listening to hearsay, assumptions, conjecture, propaganda or influencers. Yes, that includes questioning what you read in this very article.

There definitely is a chance the site will get penalized. But hey, this took me 2 hours to make and has been ranking for over 2.5 years. Talk about a good ROI for my time… 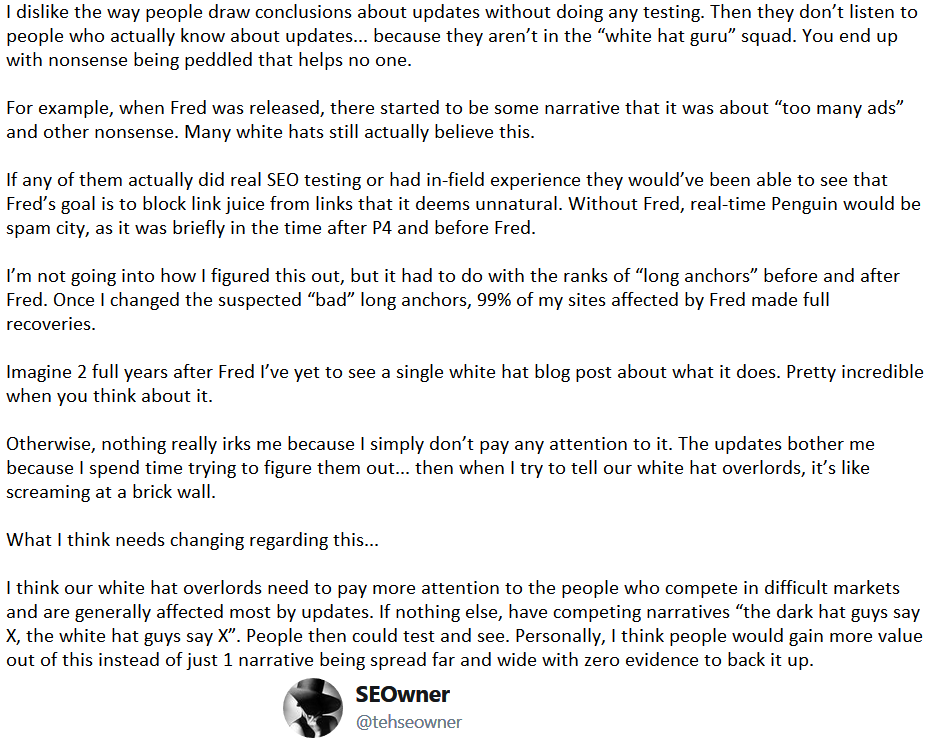 Now, ask yourself honestly. Do you do perform your own tests? Or do you just accept what Google says not to do?

And here we have another example:

Is this actual truth? How can you be for certain? Did you actually test it for yourself? Or did you just blindly accept it as fact? I won’t go into specifics, but this example was used for a reason.

Wouldn’t it be more productive if Google worked on solving algorithm flaws instead of the dismissing they exist and blackmailing us into following their rules? ?

To end this off, I’d like to say that until the industry as a whole shifts towards a completely different approach and mindset to SEO, I can never see this changing. And based on the innovation over last 10 years, or a severe lack thereof — ‘blackhats’ being shunned by the ‘whitehat’ community, and the really freaking smart, skilled SEOs forced to go rogue — I can only see this game getting worse. I wish you good luck out there.

Tired of doing outreach from scratch? Well, you're just in luck. Our team has successfully secured links on all of these sites over the years... so it's almost guaranteed they'll fall for your pitch — hook, line, and sinker ?